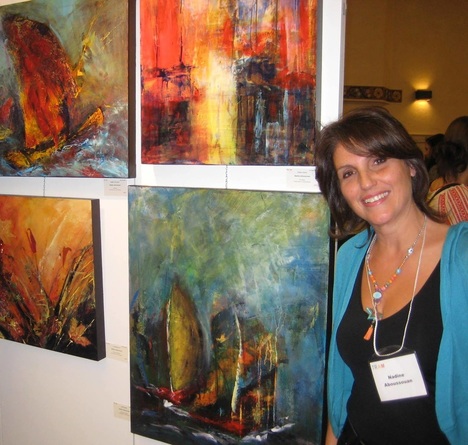 Nadine Aboussouan has always had a passion for the arts. After a rigorous scientific program at the Université Pierre et Marie Curie in Paris, she returned to her artistic inclination in the 90s in the USA, where she pursued drawing courses at the Delaware Art Museum and silk painting classes. Fascinated by watercolors for many years, upon coming to Montreal in 2004 she expanded her portfolio to include this art form and began to participate in group exhibitions as a member of the Town of Mount-Royal based artist association Arttram.

Acrylics and mixed media techniques are her most recently explored media, and she now expresses her creativity on canvas, wood and aluminum at a much larger scale. Aboussouan continues to explore new themes and techniques. Her pieces are being recognized and admired for their rich texture and vibrant palette.

Deeply attached to her Lebanese roots, Aboussouan’s work focused for a while on a historical theme: representations of ancient Phoenician statuettes that have become a cherished symbol of the Lebanese Diaspora. Aboussouan’s earlier series of paintings of ancient Phoenician figurines proved very popular in her first solo exhibition in December 2013 at the Galerie d'art LSB owned by Montreal photographer Lori Burnett. Her second solo exhibition in June 2015, entitled Voyage dans le temps, focused on Ancient Egyptian and Phoenician civilizations and showed some of the artwork of the time, such as ceramics and metal work.
Powered by